With roots firmly in the ground, it is possible to look to the future with confident enthusiasm, as do the Ceschin family whose close links to their origins and the land created the preconditions for a thriving business. Their relationship with the art of vine growing dates back to the 18th century, when they took their first steps in the world of wine through trade between Venice and Cadore. Fully aware that they come from a generous land where time is marked by the painstaking, patient work of its inhabitants, the mild climate and gentle seasons, the Ceschin family for years nurtured the ambition to create a new culture of wine and especially Prosecco, transforming a passion into a calling, and producing top quality Prosecco Superiore DOCG. Finally in 1978 Fabio Ceschin, with his wealth of experience backed up the diploma he had just obtained at the Wine School of Conegliano, decided to make a dream come true and established Il Colle. Still at the helm of the business with his wife and three children working alongside him, he is continuing a tradition that stays true to itself and respects the values of the land and the art of winemaking, while steadfastly looking ahead.

Il Colle, whose art in cultivating Prosecco has been on-going for four generations, brings together very specific values such as tradition, family, respect for the land, trust and innovation. It is these elements that have made it a byword for quality and a benchmark for local producers. Its highly favourable geographical position has meant that Il Colle can devote most of its resources to cultivating Prosecco Superiore DOCG, the essential expression of a land which is a true natural heritage. Il Colle harvests approximately 1500 tons of grapes, almost a third of which come from the family estate while the rest comes from small farms in the area. The close cooperation with local producers enables a well-established production capacity to be maintained without jeopardising the healthy and authentic nature of the vinification methods. Due to the particular lie of the land, the grapes are still harvested in the traditional manner, strictly by hand.

Nine provinces guard a true natural treasure. It is a land with a climate protected by the Alps and mitigated by the Venice Lagoon, where vine growing goes back to time immemorial. The grape variety Glera, the base for Prosecco wine, finds its genuine expression here. Il Colle winery, particularly well known for its Prosecco Superiore DOCG and Cartizze wines, is located in San Pietro di Feletto in the province of Treviso. The estate lies between the municipalities of Conegliano and Valdobbiadene, historically the best area for producing Glera grapes, so the Prosecco produced here is of superior quality. In 2009 this area and its wines were awarded the title Conegliano – Valdobbiadene Prosecco Superiore DOCG: an appellation of quality certifying the Registered and Guaranteed Designation of Origin of the Prosecco produced here. Il Colle is one of the long-standing wineries in the area which has earned itself this prestigious title. Cartizze: superior sparkling wine The finest product comes from the Cartizze area, which is limited to just 100 hectares. It is where a temperate microclimate meets an ancient soil to produce the famous Superiore di Cartizze, our flagship product. Man has been making wine in this area for centuries alongside an unparalleled wealth of culture, history, art, food and wine. The Prosecco Superiore DOCG terroir has been recognised as one of the most important winemaking areas in Italy and has been nominated as a UNESCO heritage site. Il Colle has always believed in the importance of local ties, of working with the local people and reciprocal loyalty. For the past 35 years it has collaborated with a group of just over 50 small producers who still harvest their grapes in a healthy, traditional manner. 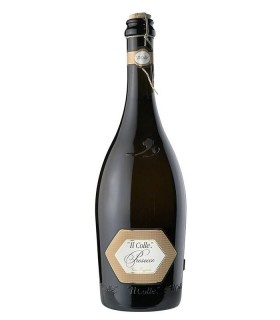